Jonathan Juergens has spent most of his adult life dedicated to security.  After graduating with an Associates Degree in Law Enforcement, Jon has been the head of security for large events, a tactical responder, head of security for night clubs, armed personal security, trained in medical response, HAZMAT response, fire fighting, and  active threat response.

Jon got his start in electronics integration in 2007, with a ground-up approach at a family owned company.  Jon worked with most of the original technicians and was privileged to learn many of the techniques they used in pioneering the local banking industry.

In 2008, he became lead technician for over 70% of the work performed in their most profitable year.  His work is featured in many installation manuals for national accounts.  He set industry standards for quality and documentation and pioneered strategies for better installation practices and safety.  His reputation for completing jobs without missing a deadline, and never failing an inspection in areas like Chicago and St. Louis, led him to an opportunity to work for a large general contractor.

In 2016, Jon decided to join his father in building the company.  Adding his own vision, he has helped grow Teufel Hunden Electronics into what it is today.

Since leaving the Marines, Greg has been on several successful teams.  He has been a senior technician, a project manager, a systems engineer, a contract administrator, and a systems sales and designer. Greg has been involved from concept to completion on jail, corrections and sheriff department projects throughout the country during his time in the trade.


Greg has been a licensed contractor in the state of Illinois since 2006.
In late 2015, he had a different vision as to how he saw the trending security business moving and how he should be reacting to it.
Greg made the decision to strike out on his own, and the dawn of
​Teufel Hunden Electronics, Inc. was born.

Greg Juergens was a member of the United States Marine Corps from 1982-1992.  During this time, he worked on CH53 A/D and Echo helicopters as an Avionics Technician.  He was also an instructor responsible for writing curriculum to train helicopter technicians deploying during Desert Storm.  Greg was deployed to Japan and Korea during his time in the Marines.


At a pivotal point in his military career, he was offered an opportunity to move home to Illinois, and offered a position with a well-established electronics security business.  In 1992, Greg moved his family back to his home state and began his career in the security industry. 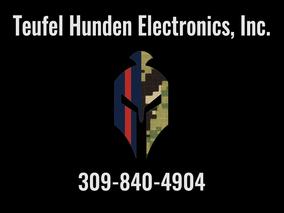